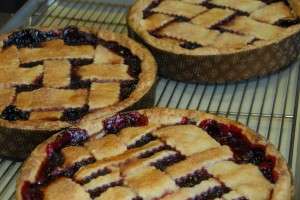 It probably wouldn’t be cost effective to put a Fresh Pie sign on the Moon, but it would certainly be eye-catching. A massive neon sign taking up the entire full face of the Moon. Blinking on and off. Fresh Pie, with an arrow pointing at our farm in California. I imagine it would tick off the environmentalists. They tend to get upset and freak out over any kind of development. The nice thing about the moon, though, is that there aren’t any so-called endangered species living up there (at least, none that I know of). No tiger salamanders or red-legged frogs. Thank God. Might be some green tentacled hopping aliens, though, but they aren’t on the endangered species list.

The top two pies in this photo are mixed berry. The bottom pie is an ollalieberry. Ollalieberry, if you aren’t familiar with it, is a cousin of the blackberry, but it tends to be a larger and sweeter berry. It makes for an excellent pie. These pies are deep dish, just out of the oven, and have definitely been consumed by the time you set your eyes on this photo. That’s life, ain’t it?