A good apple pie isn’t that much different than a good story. Both of them require a baker of sorts. Both of them rearrange pre-existing items into a mixture. The pie and the story are then eaten and, hopefully, appreciated. Both of them provide sustenance.

We bake a lot of pies on our farm. We only bake on Tuesdays and Fridays. The pies that 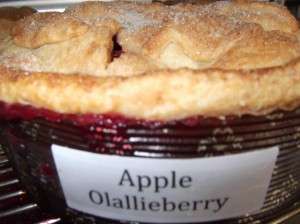 aren’t sold get wrapped and put in the freezer. The frozen pies sell throughout the week and they sell well. The freezer is always on the verge of emptiness.

Even after all these years of nouvelle cuisine and the search for new flavors and fusion, the humble apple pie is still the favorite pie of America. It isn’t a difficult pie to bake, if you know what you’re doing. Pick your baking apple of choice: Fuji, Granny Smith, Fall Gravenstein, whatever. Peel, cut, remove seeded interior, slice. Macerate the apple in a mixture of sugar, cinnamon and flour. Mix your pie crust…

Stop right there. Put down your car keys and your culinary fatalism that is about to send you careening down the road in search of an anemic, mass-produced pie gathering frost in the frozen goods section of your local grocery store.

of it comes down to what kind of fat you prefer: lard, butter, shortening, oil. They all have different advantages and different shortcomings. You’ll have to experiment. Suffice it to say, speed of handling is key for all of them. 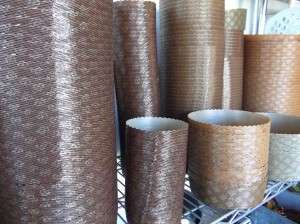 We bake our pies in a special heat-proof paper forms that come from Italy. The paper produces a superior crust. If you’re curious about the forms, for whatever reason (some people are concerned about the health issues of baking in aluminum—a valid concern, I think), we buy them via Novacart.

It is somewhat tricky to get the rolled-out pie dough into the paper forms. Pie crust goes in, apples go in, top with thinly shaved butter, top crust goes on, edge gets pinched together, top crust gets milk-washed and sugared, decorative crust gets applied, and vent holes get cut. Then, into the convection oven for about an hour at 325F. 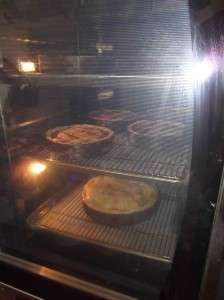 For the last ten minutes of baking, the pies must be carefully watched. As soon as the juices bubbling through the vents reaches a suitably sticky quality, they’re done. Whisk the pies out to cool and they’re done.

You see? Baking an apple pie really isn’t much different than writing a story.

4 thoughts on “The story of apple pie, or the apple pie of stories”