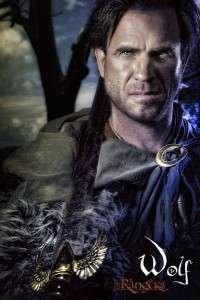 The Rangers is currently in pre-production, with filming scheduled for August. We’re doing a short film of 40 minutes, fully funded from our Kickstarter campaign from earlier this year. In a nutshell, Rangers is an epic fantasy off-shoot of the Lord of the Rings in sensibility and types of characters. The story involves a Ranger unit operating in the wild lands, trying to administer the King’s justice while fighting off bands of orcs. A deeper darkness, however, has come to the wild lands, an old evil that is working behind the scenes to topple the kingdoms of men and elves.

I co-wrote the script for this one, along with Scott Mathias and Ron Newcomb. That’s the same trio that wrote The Fellows Hip: Rise of the Gamers, the indie comedy that won Best Feature at the Indianapolis Gen Con Festival 2012. While that film didn’t get theater play, it has gotten plenty of foreign television deals (France, UK, Russia, the Middle East, etc), as well as straight-to-video deals in places like Walmart, as well as streaming on-demand on Netflix, etc. Ron is directing the Rangers and Scott is producing.

There’s quite a market for epic fantasy films these days, not that that’s apparent from the

movies showing up in your local cinemaplex; rather, there is a steady stream of low-budget indie fantasies from companies such as Arrowstorm Entertainment. Epic fantasy, as a genre, has a fan demographic that consumes at a fast and rapid rate. Therefore, a great deal of new stories are needed, whether that be in book form, comic form, or film/tv form.

At any rate, I’m looking forward to what Ron and Scott and Company pull off. Shooting will occur in the Virginia area. If you’re interested in working on the project in a crew or cast capacity, please get in touch with the production office (there’s info at this link for how to upload Youtube auditions if you’re interested in a part). I’ll post updates from time to time. The images in this post are from some conceptual photo shoots: Lieutenant Wolf of the Rangers (that’s Wolf Sherrill, who played a big role in our previous film, The Fellows Hip), Prince Korlan of the Dark Elves, and Celistar of the Wood Elves).