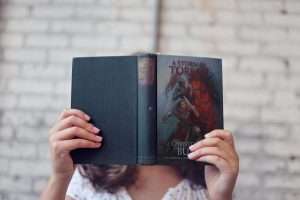 Odysseus sailing home to Penelope. Romeo and Juliet. Aragorn and Arwen in The Lord of the Rings. From Homer to modern times, the stories of literature are often formed by the love between a man and a woman. And, in many instances, a story is not just formed by that particular relationship, but it is the heart of the story. Could Shakespeare have written Romeo and Juliet without Romeo and Juliet?

That sounds rather self-evident, but we sometimes need to re-aquaint ourselves with glaringly obvious truths. A great many stories are only possible because of love.

It’s important to note here that I refer to agape love (or sacrificial love) rather than erotic love. Agape love can, of course, refer to much more than merely the love between a man and a woman. It can be the love one has for country, family or friends. Despite the fact that Shakespeare found English handy enough to work with, it is limited in some regards, particularly with the word snow (as opposed to the Inuit language having more than a dozen variations of the word) and the fact that English has only word for the idea of love has caused many a stumble in relationships, writing and dreary high school literature classes.

A Reminder of the Noblebright Context

As you know (or should know), I write primarily in the epic fantasy, specifically in the noblebright category of that genre. I’ve mentioned noblebright before, but, for sake of clarity and the context of the point I’m underscoring in this brief essay, noblebright is simply fantasy in which life is portrayed via the worldview that absolute good and evil exist. The main character or other characters make choices or strive to make the right choice in the context of good and evil. This doesn’t mean, of course, that such characters always make the right choices like good little robots. It doesn’t mean they never fail. It doesn’t mean that everything is sweetness and light. Noblebright does mean, however, that choosing good is worthwhile, that hope, courage, nobility and redemption are worth dying for.

If you want to read a more comprehensive discussion of what noblebright is, I would point you to the site of CJ Brightley, a fellow noblebright writer.

Anyway, what does all this have to do with Odysseus and Penelope and all the other love stories of literature?

Like I said at the beginning, everything. Regardless of genre, the love relationship in a story has a noblebright heart if the relationship is ultimately defined by hope and self-sacrifice. The love between a man and a woman only truly works within the context of an absolutist concept of good and evil. The princess is only worth dying for if love means laying one’s life down for her, either in genuine death or the little, everyday deaths of preferring her above self.

Love has to mean something if it is worthy enough to demand sacrifice. If love is only defined by hormonal needs, physical urges, or the survival and propagation of the species, the continuation of king and country, then, honestly, at the end of the day, who really wants to sacrifice for that?

But if love means something more… This choice of laying down one’s life, as I’ve alluded to previously, does not only apply to the agape relationship between a man and a woman. It can manifest in equal beauty and power in love of country, family and friends.

This hopeful and noble impulse to lay one’s life down, to sacrifice one’s mirror-gazing impulses of me, mine and what I desire, has provided the beautifully powerful engine of motivation for countless stories. This motivation isn’t universal within literature, but it seems nearly so, once you take a hard look around the books on your shelf. The Count of Monte Cristo? Dantes’ desire for revenge is largely motivated by his grief and loss of his fiancée Mercedes. Tale of Two Cities? The story would collapse without the love between Charles Darnay and Lucie Manette and, more importantly, the sacrificial love of Sydney Carton for Lucie. The Lord of the Rings? A great deal of Aragorn’s motivation revolves around his love for Arwen.

James and the Giant, or practically most any of Roald Dahl’s books for children, is underscored by a love of family. Rather, James’ primary motivation is the grief he suffers because of the death of his parents and his subsequent search to find a new family. This urge is so powerful for him that he is even hopeful, at first, in finding such a relationship with his aunts Spiker and Sponge, before settling on his unlikely insect friends.

Circling back around to the genre of epic fantasy, Aragorn and Arwen cast a long shadow across the younger fantasy writers of the 20th century and 21st century. While most modern noblebright fantasies don’t necessarily have romances woven through them, the qualities of sacrifice and agape love are common to them. Soldiers ride off to war, or adventurers sally forth on their quests, often for the sake of those they leave behind.

In my trilogy, A Storm in Tormay, I used love as a motivation for several of my main characters. With Jute, my lead character, most of his motivation sprang from his lack of family. He was an orphan, essentially defined by that loneliness, and always hopefully looking for a way to heal his heart. If you’re familiar with the story, this will explain his patience with the acerbic hawk and the irritating ghost, not to mention Ronan. And Ronan himself, the bitter assassin, his choices in the story are mostly motivated by his unrequited love for the sea girl Liss. Even though she could have forced him to spend his life protecting Jute, she wisely knew he would have more resolve if he made that choice of his own free will, a free will bowing at the altar of agape love.

The Odd Limitation of Grimdark

Interestingly enough, you simply cannot write a character capable of sacrificing his life for others outside of the noblebright context of absolutist good and evil. And this connective thread leads me back to my rather brash statement in the beginning that love has everything to do with noblebright. Not just practically everything, but everything.

Grimdark (George Martin and compatriots) is the epic fantasy genre counterpart of noblebright. While full of highly accomplished and amazing storytellers, grimdark tends to fall oddly flat in most instances of agape love. To be blunt, grimdark simply doesn’t exist within the necessary worldview to support such love. Its worldview is amoral, and genuine sacrifice made out of hope, faith and love, can’t find the oxygen to live within such a bleak landscape.

Noblebright, on the other hand, exists within an absolutist view of good and evil. That is, good and evil exist external to mankind. Mankind, of course, can certainly choose to devote itself to evil, but evil does not need mankind to define it, create it, or live and breathe to keep it alive as a concept or a thing.

The same goes for good.

And the good that exists external to mankind is love. Shining, triumphant, hopeful and patient in its sacrifice. Thus, Odysseus had enough hope to sail the long voyage home, Sydney Carton found the strength to make that last ride in the tumbril, and Arwen laid down her immortality to wed Aragorn.

One thought on “Love in the Time of Stories”