You see, with humans, they’re all unique, like snowflakes or Faberge eggs or 90s Seattle bands. Landon is a fantasy writer. I haven’t read his books, mind you, but I have a firm belief he IS a fantasy writer due to the preponderance of evidence (Sherlock Holmes, that’s me). Anyway, Landon dropped in today, crashing through the skylight due to a minor parachute malfunction. So, here he is, answering questions and even more questions.

Hey there, Landon. I have a good homeowner’s policy, so I won’t sue you for breaking my skylight. Anyway, who exactly are you?

I am Landon Porter, a spec-fic writer and all-around nerd. I’m a few
months out from turning thirty as of this interview. I’ve been telling
stories since I was kid and writing original works online since 2002
in the now-defunct webcomic, Ledgermain.

Webcomics, skydiving? After such a career, why are you now writing books?

Because the stories are already there in my head. If I didn’t write
them, they’d probably stay there, piling up. The act of creation is
something that just feels good.

As an added bonus, entertaining people is something I just love doing.
There’s nothing like hearing about people who get excited or surprised
or pumped about a story I created.

Now, according to my advanced computer modeling, you apparently have chosen to write in the fantasy genre. Did a withered gypsy woman instruct you to do so after you crossed her palm with silver? Why fantasy?

It’s just so big! You can do anything in the fantasy genre and shape
every facet of the world to work exactly the way you want it to. It’s
a bit like being a mad scientist really: you put your mind to it and
no matter how insane or over the top the thing you’re trying to make
happen is, it happens. 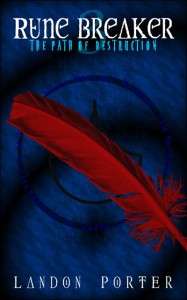 Too true. That sort of reminds me of my cooking philosophy. Now, what’s the deal with your most recent book? What’s it about?

My most recent release was Path of Destruction, the third book of my Rune Breaker series. After I really knocked the cast around in the previous book, this one is all about them actually getting to know each other and themselves.

Ah, monsters. I’m very fond of monsters. They make me hungry. How about yourself? What do you usually like to eat?

I am nothing if not a simple man. A nice chopped steak on a bagel with
scrambled eggs, cheese and onions with hashbrowns on the side make me
a happy camper.

Speaking of scrambled eggs (and I will refrain from quoting Lenin’s egg quote here), how do you see the world, and how does that form your writing?

I think the world is a lot more glorious and awe inspiring than we
give it credit for, from how we interact with each other to how
everything in our universe reacts to everything else.

That’s why my stuff is all about intellectual curiosity, personal
relationships, and the wonders that can emerge from following up with
them. I don’t write dark, cynical stuff. I write about glory and
heroism and who that darkness and cynicism is ultimately doomed to
fail.

Are there some fantasy writers who have greatly influenced you (other than me, naturally)?

I, of course, read Tolkien in high school, along with Mickey Zucker
Reichert and Robert Jordan. All three of those gave me the taste for
the genre, along with Jeff Grubb’s Magic: the Gathering licensed
novels.

More recently, I’ve found myself highly admiring Jim Butcher because
we have similar approaches to story telling (never backing away from
the light moments but knowing when it’s time to be serious), Brandon
Sanderson (especially his amazing world building) and Scott Lynch
(For… everything he’s done with the Gentleman Bastards books)

Speaking of people we admire, Fred G. of Chicago, Illinois, just phoned in with a question for you. He says Christopher Nolan (director of Batman, etc., and frequent consumer of bagels) is right up there on his list of amazing people, along with Abraham Lincoln and Shirley Temple. If you could call him up and say, “Nolan, there’s a book I’d like you to turn into film,” which book would that be?

Mickey Zucker Reichert’s Legend of Nightfall. I think the feel of that
universe is right up there with Nolan’s style and the main character’s
slow turn from villainy to heroism would be right up his alley.

And there you have it. Let that be a lesson to all of you. If you have a moment, please visit Landon at his website. You can also purchase his books right here (that’s more of a there than a here).