I first met CJ West way back in the old days, back in the winter of 2011. He visited the site then for an interview about books and life in general. I think the subject of cows and Switzerland might have come up, which is always controversial, of course. Speaking of controversy, CJ is back with a very thorny subject: when is homicide justifiable? That’s actually (and honestly) something I’ve thought about from time to time. The classic setup is the mad dictator. If you could remove a mad and genocidal dictator from life in order to avert future catastrophe and mass death, would you? Anyway, it’s a fascinating topic and I’ll let CJ take it from here… 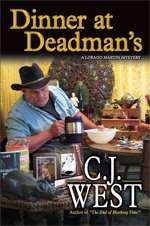 In the last six months I’ve been working on my bucket list and during the process I pressed myself to come up with the best thing I could do for the world. High on my list of things to do before I die are to help a troubled teenager get back on track and to volunteer to help clean-up after a natural disaster. But when I really considered how I could best use my talents to help our society, the answer startled me.

Before you freak out and flame me to no end, read on.

I’ve been writing about crime since 1999 and lately I’ve come to believe something I heard at a writers conference several years ago. Former detective Lee Lofland said, “Drugs, not money, are the root of all evil.” After researching the drug culture for my novel, Dinner At Deadman’s, I couldn’t be more convinced that Mr. Lofland is correct.

I’m awed sometimes at the public acceptance of illegal drugs in America. A few weeks ago, I heard a story from a kid who said his cousin was arrested for selling heroin. He was sentenced to 5 years, which seemed overly harsh to this kid. In my eyes 5 years wasn’t nearly enough.

Once I started my research, the stories of wrecked lives were too easy to find. I think many of us tend to blame the addicts for their problem, assuming they have a character flaw of some kind that makes them less than human. My research has opened my eyes. I’ve met kids who were injured on the playing field and went from painkillers to addictive illegal drugs. I’ve also met blue collar workers who suffered serious injuries at work that led them from productivity to a life of crime and dependency.

The blame can’t be entirely be placed on the dealers. If there was no market to purchase illegal drugs, they wouldn’t stay in business. This is true, but where the drug users are self-medicating and destroying their own lives to serve their addiction, the dealers are destroying the lives of others for financial gain. And the larger problem is that one drug user impacts the lives of many people. Eventually most heroin users need to steal to feed their addiction. Family, friends, and neighbors all suffer at the hands of an addict.

I hope you’ll read Dinner At Deadman’s for a peek into the struggles faced by substance abusers. I think when you understand their desperation you just might see why I think drug dealers are a blight on our society to be removed.

I’m 45 years old, in decent shape, fairly intelligent, and a pretty solid shot. I estimate my chances of killing a drug dealer and getting away with it at about 75%. I’ll leave you to guess how serious I might be about the proposition.

C.J. West is the author of seven suspense novels including The End of Marking Time and Sin and Vengeance, which was optioned into development for film by Beantown Productions, LLC (screenplay by Marla Cukor). C.J. blogs at www.cjwestkills.wordpress.com. You can also find him at www.22wb.com or at www.facebook.com/cjwestfans