Fantasy author Ty Johnston approached me recently about guest posting on my site for his November blog tour. I assented, as Ty is not on the FBI’s Ten-Most-Wanted-List, and I’m pretty sure that, if he’d been there, he would’ve jumped in on my side during that tea room brawl in London, back in 1990. That was a rough time. Those little old British ladies are quick with their umbrellas. Anyway, Ty’s novels include City of Rogues, Bayne’s Climb, and More Than Kin. They’re available for the Kindle, the Nook, and online at Smashwords. Ty’s latest, Ghosts of the Asylum, will be available in e-book format on November 21. If you want to learn more about him and his mad Indian fruitbat skills, go check out his blog.

Okay, without further ado, here’s Ty. I asked him to write about influences, which is always a fascinating subject for me (regardless of whether we’re talking influences on an author or influences on plain old life itself). 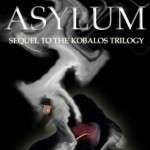 Writers are always influenced by outside sources. We can’t help it. We’re human. We soak up the outer world as if a sponge, just like everyone else. However, what makes writers different from most is that like a sponge squeezed out, we send back out to the world what he have soaked up, only re-shaped and twisted.

My own influences are nearly numberless. Every book I’ve read, song I’ve heard, movie I’ve seen, person I’ve met, all have been an influence.

Some influences have had more of an affect upon me than others. In fact, recently I released a non-fiction e-book titled 100 Days of Fantasy which looked back at 100 books that have had a major influence upon myself and my writing.

Looking back, I suppose my earliest major influences were comic books. As a child of the 1970s, my heroes were Spider-Man, Superman, Batman and the Fantastic Four. I can remember my first attempts at writing were me sitting down with notebook paper and markers, creating my own comic books. I came up with my own heroes and villains, but also worked in some of my favorites from Marvel and DC Comics. To this day, I still remember my favorite hero creation was an alien from another planet who was sent to guard Earth. His name was “Destroyer X,” and who knows? Maybe someday I’ll actually write down his story.

As I grew nearer my teen years, I discovered prose literature, one of my early favorites being the works of Tolkien.

Then when I was seven years old, everything changed. Star Wars entered our universe. I don’t know if younger nor older generations realize the impact Star Wars had upon children of that time. Everyone recognizes the cultural phenomenon, of course, but I think there was perhaps something almost mythical that embedded itself into the young minds of 1977 through 1983. Or maybe I’m reading too much into it, remembering with fondness the days of my youth. It seems to me, however, that the first Star Wars movie (I refuse to call it A New Hope … it’s Star Wars!) affected a generation as much as did the counterculture movement of the 1960s, or similar social constructs that have had big influences upon the culture at large.

And yes, Star Wars had a major influence upon myself as a reader and later as a writer. The basic, mythical story of that first movie pushed me toward reading more and more fantastical literature.

Outside of George Lucas, film director Sergio Leone also had a big affect on me as a writer. His spaghetti westerns, most but not all of which star Clint Eastwood, are beyond the scope of most Westerns I’ve witnessed on the big screen. Leone’s tales are not of men gunning down other men, but are of gods walking the Earth among us mere mortals, dealing out carnage when called upon to do so.

By my teen years, music began to have more of an influence over me. I listen to mostly hard rock and some heavy metal, but with the occasional foray into lighter rock or even pop music. To this day, sometimes I’ll hear a musical lyric (or what I think was the lyric), and the kernel for a story will suddenly pop into my head. On that regard, I’ve had the most luck with Soundgarden and Rage Against the Machine, with Counting Crows following not far behind.

Throughout my life, or at least since the age of five or so, I’ve been a reader. Dozens of books have had a major affect upon me over the years. Some of them are The Stand, Education of a Wandering Man, World War Z, War and Peace, The Three Musketeers, Watership Down, The Iliad, etc. I could go on. Of late, I’ve quite enjoyed the Malazan Books of the Fallen by fantasy author Steven Erikson.

As with many of my generation, role-playing games have had an affect, the main game being Dungeons & Dragons. Playing a character was always great fun, but I also enjoyed being the game master, running my own worlds. Unfortunately, I’ve not had the opportunity to game in years, and I miss my old gaming groups.

Family has also influenced my writing. I grew up among working-class folk from the mountains of Kentucky, most of whom did not have a great love of literature. However, I was fortunate in two aspects. One, my interests in writing and reading were never frowned upon. My grandparents, who came from the world of coal miners, never disparaged my great loves. My mother, who does not quite understand me to this day, still was the first person to ever buy me a book, and still does so from time to time. If there is anyone like an intellectual in my family, it would be my father, though he would likely disagree with me on this. Not a formally educated man, he has been a student all his life, studying mostly philosophy and religion. My novel More Than Kin is dedicated to my father, and many elements of the main character are taken from my father.

So, those have been some of the major influences upon me as a writer. Every day I am greeted with more influences, some I wallow in, others I try to discard, but they are all there. I can’t help it. I’m a writer.