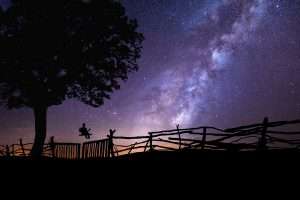 There’s a Special on Dark Matter in Aisle Seven

According to the commonly accepted model of cosmology, ordinary matter and energy as we know them, make up a little bit less than five percent of the universe. I suppose ordinary matter has a lonely job of it, seeing that there isn’t much of it to go around.

Another ten percent of the universe is made up of unknown matter–a fascinating category that doubtlessly includes what most government bureaucrats do with their time, the lost vortex of unmatched socks, years and years of mysteriously vanished homework, etc. The last eighty-five percent is dark matter and dark energy. Eighty-five percent is quite a large piece of one hundred percent, but what do I know? I didn’t learn my math via common core.

Dark matter can’t be seen with any of the technology we currently have, but its existence can be deduced by observing its effects, just like we can know the wind exists by seeing tree branches bending and swaying. The grass blows in the wind, flower petals flutter, and palm trees bow before the hand of the gale. Similarly, the stars and galaxies float in the unseen grasp of dark matter.

This begs for stories. Even though I tend to write epic fantasy more than anything else (my childhood formed by reading Tolkien and Lewis and Susan Cooper late at night under the covers with a flashlight), the universe beyond us has always charmed my attention with its potential for stories. Thus, my brief writing sidetracks into stories like Sparrow Falls or The Ocean Won’t Burn.

Dark matter is most “likely composed of a current unknown fundamental particle.”

My suspicion is that dark matter is composed of faith, hope and love, patiently holding the universe together, including even our little vexatious planet. And, if astrophysicists continue searching out dark matter’s composition in the children’s toy box of Matter-Is-All-That-Is, they will never figure it out.