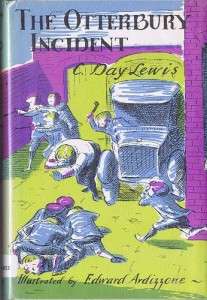 These days, I’m convalescing at my folks’ ranch. I spend the vast majority of my time in bed, which means I’m reading a lot. And I mean a lot. I’ve taken to raiding the library for old books from my childhood. Yesterday, I rediscovered The Otterbury Incident.

Written by C. Day Lewis in 1948, the Incident is the story of a group of schoolchildren in a small town in post-war England. In a nutshell, the plot is about how they tangle with a gang of crooks and deal with them without going to the police or any adults for help.

It’s a marvelous book, written with dry wit and an elegant understated style. C. Day Lewis was a professor of poetry at Oxford and also was made the poet laureate of England in 1968. Suffice it to say, he knew how to use words.

I was somewhat apprehensive when I started reading yesterday. Some books, dimly remembered from childhood, do not stand the passage of time. Sometimes that’s due to how stupid we become as adults. Sometimes that’s due to how poorly the book was written. The Otterbury Incident, however, admirably stands up to the passage of time without even breaking a sweat. It’s a pearl of a book and well worth owning in physical form. If you have a precocious child, they will greatly enjoy it (unless they’re a goggle-eyed little TV addict) and I daresay that adults who enjoy more traditional British humor will enjoy it as well (for them, I would say the Incident feels like a younger, more cheerful cousin of Kingley Amis’ Lucky Jim).

I briefly visited Egypt a long time ago, back in 1988. It really wasn’t much of a visit. Just a few days in the Cairo area. Wandering through the Khan-Khalil bazaar in the evening left the biggest impression on me. I might be wrong, but I think it’s the biggest bazaar in the world.

The other strong impression I have is driving across the desert. The sand dunes were huge, like enormous rogue waves towering above the road. One would half expect to see Laird Hamilton being towed in so he could he come screaming down the wave on his board. Then, of course, nearing the Suez Canal, the superstructures of the tankers became visible, floating across the sand, miles away. They were odd sights. Disembodied from their hulls and more unusual than any mirage.

I wonder, these days, if the Pharaohs are sleeping comfortably in their tombs? When the initial uprising happened in Egypt last year, I wondered if the ultimate outcome would be even worse than the Mubarak dictatorship. Sure, Mubarak was not the kindliest dictator around, but things can always get worse. It appears as if things have gotten much worse with the military’s decision to dismantle the parliament and rewrite the constitution. Ironically enough, it looks as if they did it to forestall a religious takeover of the government. That probably would not have gone well. However, what the military is proposing probably will not go well either.

Democracy doesn’t seem to work well in countries without a substantial judeo-christian heritage. Perhaps it boils down to the role and worth of the individual within society? If a society places a higher value on the community rather than the individual, I would guess that democracy is most likely doomed in that society. There’s going to be other influences as well, of course. Russia is a good example of that. Centuries of totalitarian rule, whether it be the czars or the children of Lenin, do not bode well for democracy.

Anyway, I hope the Pharaohs don’t turn too much in their sarcophagi. One too many uneasy turns and their mummy shrouds will start abrading into dust.

Asterix the Gaul by René Goscinny

There’s a bookshelf behind the piano at my parents’ house full of almost every Asterix book (and Tintin book, for that matter). I grew up reading the Asterix books, over and over and over again. I started out in appreciate of the adventure and crazy characters. As my thinking progressed, I started appreciating the punnery as well. They’re wonderful books, superbly drawn and written with wit and real affection for the art of story-telling.

I’m extremely selective about buying new books. It comes down to shelf space, the cost of money, being able to find a lot of decent used books in thrift stores or used book stores, etc. However, the Asterix books are well worth their price new. The collection at my parents’ house is jointly owned by my brothers and my self, so I can’t run off with them in good conscience. That said, I’ve started slowly amassing my own collection.

If you enjoy the Roman Empire, puns, violent (yet kindly) Gauls, and feasting on roast boar, you will want to own these books. All of them.

The Giant Under the Snow by John Gordon

Lately, I find myself more and more irritated with modern books written expressly for grownups. There are exceptions, but I find a great deal of them boring, ponderous and staggering under the weight of their self-imposed importance. Perhaps this is due to my advancing years, my own impatience and cantankerousness; I suppose that’s the charitable interpretation. Whatever the reason, I’ve been looking back more to the past and rediscovering the books I enjoyed as a child and a teenager. A great many of those books do not hold up well with the years. Happily, a great many do.

John Gordon’s The Giant Under the Snow is one of those books that holds up admirably, despite the years. I think I first read him when I was 10 or 12. He’s a deft writer, careful with his words. If he were a painter, I’d imagine he’d be something along the lines of a Japanese minimalist (is there such a school?), painting masterpieces with spare strokes, cold, wintry landscapes hinting at great distances and mystery.

Giant is an enthralling, mysterious story of three friends who discover an ancient belt buckle while on a school outing. The discovery brings alive a world of danger and magic that exists right on the edge of their own mundane world. I hesitate to say too much, as the story should be enjoyed pristine the first time. Suffice it to say, I own a copy and re-read the story every couple of years.

I would argue that Gordon’s book is one of the very first urban fantasy books to ever be written, long before the term had been coined. I’m not fond of the genre as it currently exists; however, if there were more writers like Gordon out there, I would become a devotee of the genre. Thankfully, Gordon’s book is available in paperback on Amazon.

By the Great Horn Spoon! by Sid Fleischman
My rating: 5 of 5 stars

I’m decades past my school years, but I must confess that I still love reading Sid Fleischman books. Djingo Django, The Ghost in the Noonday Sun, By the Great Horn Spoon. He’s a wonderful writer and he possesses a rare, distinctive voice that puts me in mind of Robert Taylor. Actually, I’d peg Fleischman as Taylor’s younger brother. Even though he writes for children, his books are immensely enjoyable for anyone who hasn’t gone too far down the road of nihilism (whether personal or taste in literature).

The scenery of Horn Spoon, whether it be ship life or the California gold fields, plays a marvelous second fiddle to the characters Fleischman lovingly constructs, winds up, and lets fly. The butler Praiseworthy is a favorite of mine. I wish I had his patience, his hope, and (of course) his boxing skills. The adventures he and Jack have on their way to gold, fortune, and saving the family are delightful and easily stand up to repeated reads.

Warning: you must be somewhat a child at heart to properly enjoy this story.