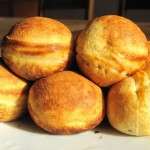 The origin of the deceptively diminutive abelskiver is shrouded in mystery. Some claim that Odin, the Father of the Norse gods, gave the recipe, hundreds of years ago, to a Danish cheesemaker named Joe. Others say that, in 973 AD, the duke of Copenhagen invented the abelskiver as his army had run out of catapultable objects in their war with Atilla the Hun. Another popular school of thought is championed by Dr. Hans Jorgenson, of the University of Malmo, who wrote a scholarly paper about how the first abelskiver was actually a small meteorite that plunged from the sky in the sixth century near the town of Flingengottersdarn, dispatching the prize goat of a local farmer upon impact. The farmer seized the offending celestial object and cried out a great lament over the body of the goat, yelling a word that sounded like “Abelskiver” to the surrounding onlookers. However, certain skeptics claim that the farmer was merely hollering in pain, as the meteorite was probably super-heated to about 350 Celsius due to its descent through the atmosphere. In either case, Dr. Jorgenson makes a compelling argument that the locals subsequently started a custom of baking small meteorites in memory of the incident. These baked objects, of course, came to be known as abelskivers.

Small, round, golden, fried in grease and composed of a mysterious combination of grease, fat, and butter, the abelskiver is eaten in every country except for China, where it is regarded with deep suspicion.

In the Danish church I grew up in, abelskivers are constructed and served one special day every autumn as an annual fundraiser. People from across our city flock in to marvel at them and, then, if they are unlucky, to eat them. People who have eaten them before also stop by, but merely to pay protection money so that they can be absolved from eating the abelskivers.

Eating an abelskiver is an art form. One popular method is to secret them in your pocket and then, later, feed them to a goat. Another method is to gather your loved ones around you at your bedside and furnish them with copies of your will. A third method is to eat them while driving at high speed to the hospital, where you can then have your stomach pumped.

The Danes, of course, are a people of patient cunning. Even after all these centuries, they have not forgotten their dreams of Viking conquest. While the Danish word for the Danish people, Dansk, is typically translated as the “people who eat Danish cheese,” it can also be translated as the “iron-stomached invaders.” This is the true lesson of the abelskiver, for the round, little fried bombs of golden destruction are merely the vanguard of future Danish colonialism. One day, I fear, we shall all awake, groaning on our beds, and find ourselves forced to learn Danish. Except, of course, the Chinese.