No, you read that correctly. It might be your lack of Latin kicking in. Or your lack of Babylon 5. Whichsomever the case, I’d like to introduce you to Declan Finn, the man, the author (pius or pious or not), the taxpayer. So, without further ado (does anyone still drink Mountain Dew, or is my mind feebly reaching toward a confluence of soda and hair styles?), here he is. I, of course, have questions. He has answers.

Thank you, Mr. Finn, for stopping on by today. By the way, who are you? 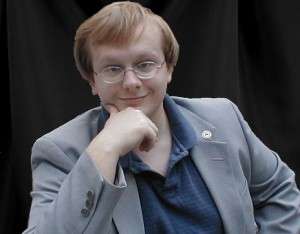 If I were truly snarky, I would answer “Who do you say that I am,” but I don’t have quite that much chutzpa.  I am Declan Finn, author of A Pius Man: A Holy Thriller, and co-author of Codename: Winterborn.  I’d be tempted to answer “a Madman with a box” or “Don Quixote,” but the voices in my head tell me that it’s not a good idea, people might get the wrong impression. Yes, that is a joke, though my characters do talk to me from time to time.  I’m also a lifelong Catholic/Conservative/New Yorker, trained in hand-to-hand combat, with degrees in history and philosophy. Which means that I know just enough about everything to be really interesting at dinner parties.

Ah, dinner parties. I once attended a dinner party in Addis Ababa where I encountered a rather sautéed cockroach on my plate. I suppose he had a few relatives in New York, but I neglected to inquire. I also digress. Back to you. Why do you write instead of weaving baskets, growing heirloom tomatoes, or invading small countries with negligible armed forces?

I write mainly because I have to. I feel compelled to. This compulsion hits especially hard when I wake up in the middle of the night and I have to run to the nearest notebook (by my nightstand) in order to take down everything I just thought of before I forget it all. Heck, no one with an ounce of sense should go into professional writing unless there is nothing else for them. By that I mean that most writers I’ve come across all seem compelled to write professionally. We almost all lay in bed in the middle of the night and keep a notebook close at hand so we can write down ideas before we forget them. Or we start writing a simple amusing fact and suddenly fill the page with an outline for a novel. Writing is our drug. Our addiction. A neurotic, uncontrollable impulse. We would go insane if we didn’t write… Or merely more insane.

In the case of A Pius Man, I wrote it because I realized that more people probably learned “history” from novels than they ever did in grammar school. And there were plenty of novelists who were quite willing to lie about Pope Pius XII in order to sell a story. I wasn’t. So, A Pius Man.

True. I learned no history at all in grammar school, other than certain details about the modern drug trade in California. That was more experiential knowledge than academic. Speaking of experience, what is your personal philosophy of life and how does that affect what you write?

If you mean how I approach life… I usually try to sneak around life, flanking it, then running at it with a hammer. Patience is a good and noble virtue, but being blunt has its virtues.  I’m not entirely certain I answered the question, but it’s the best I have right now.

Being blunt certainly does have its virtues. As Churchill said, speak softly and carry a big battleship. What are your thoughts on the idea that authors (artists) have (or do not have) a moral obligation to their readers in terms of doing no harm, bettering them, ennobling their views of life, etc?

At the very least, art – or at least fiction – has to be edifying. It should build people up, not break them down.  If I read a book, I want to come away feeling like something has been added to my life, not taken away from it. Watching Die Hard doesn’t add much to my life, but it will at least give me some entertainment. Reading Dan Brown makes me lose brain cells.

I’ve often wondered (well, at least twice) if there really is no Dan Brown, but that his books were simply cultivated in petri dishes. Lab-grown kidneys gone wrong. Speaking of kidneys, what are your thoughts on modern pop culture?

Modern popular culture? Well, if you go by the bestseller lists – James Rollins, Jeffery Deaver, Lee Child, etc – the popularity of smart writing is most encouraging.  If you go by “reality television,” celebutards being called in on political panels, and the amount of air time dedicated to the media lynching George Zimmerman, then I think we’re all doomed.

Yes, we are all doomed. No doubt about that. My parents were fond of telling us that when we were small, despite sunny weather and blue skies. Speaking of skies…I think Blue Sky Studio was inadvertently prophetic when they wrote that charming little scene into Ice Age of the dodo birds chanting “Doom on you! Doom on you!” Not exactly Isaiah, but good enough for our times. Now, onto your books. Can you give us a run-down on your latest story? 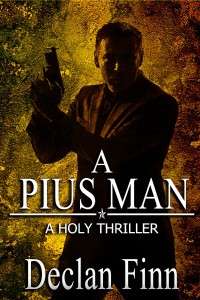 A Pius Man: A Holy Thriller starts with a visitor to the papal archives being assassinated, and his assassin being blown out of a window, landing face-first into a car windshield. The car belongs to the head of Vatican security. In short order, they discover that people going into the Vatican archives on Pope Pius XII – aka: “Hitler’s Pope” – are dying. It has a nice collection of suspects, including the Pope himself.  Like all other fiction involving the Catholic church, it has decades-long conspiracies, sinister-looking priests, and even the Pope is a suspect.  However, there are two big differences between A Pius Man and the others.  One, all of the history in this book is real – seriously, it started out as a graduate paper.  Second, I take great joy in using every single cliché about the Catholic church, and turning them upside down and inside out.

What are a few books you’ve read lately that you greatly admire and recommend?

Any of James Rollins’ Sigma novels – his most recent is The Eye of God, but I’m not certain if anyone could track it without reading the prior novels. If you want a thriller where technology and history meet, you want to read Rollins – who has been writing before anyone ever heard of Dan Brown. I recently tripped over an author named Jeff Abbott, and his Sam Capra novels are fun.

Thanks for those recommendations. Finding good books is always a bit of a chore these days. Now, as we draw this interview to a close, to its little death, let me inquire about your own (not that I’m particularly morbid, but, well…death is part of life, and vice versa). What would you like to be remembered for after you die?

But, being real… Seven or eight years ago, I gave my friend and co-author, Allan, a novel – Good Omens by Prachett and Gaiman. When he put that down as “What I’m reading” on a dating site, someone saw it and said hello.  They are now married, all because I gave him a book.  I’ll settle for that.

Great story. Books do draw people together, either for reading or burning. Best of luck (though, I don’t believe in luck) to you with your writing, paying of taxes, and other pursuits!

You can visit Declan Finn at his blog and his author site. A Pius Man is available in print, for Kindle, and on Barnes & Noble. His other book, Codename: Winterborn, is also available online at Barnes & Noble and Amazon.